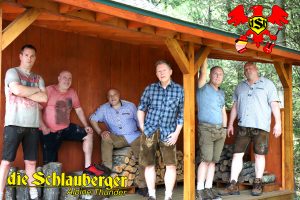 For over two decades, die Schlauberger (dSb) has proclaimed "expect the unexpected." Musical proof that entertainers can please just about everyone, dSb is a powerhouse of musical expertise.

Performing festival standards to rock and roll meets alpine power; dSb expends enough energy to light up not only the crowd but the fairground as well. From the moment dSb steps on stage until they have wrung the final note from their last song, the band engages everyone within earshot to join the fun. Their stage show has wowed crowds in venues as varied as the Trump Taj Mahal and Tropicana Casinos in Atlantic City, the Wurstfest in New Braunfels, TX, Oregon’s Mt. Angel Oktoberfest, the Hunter Mountain German Alps Festival, the Cincinnati Oktoberfest, German Fest Milwaukee, Bethlehem Musikfest & NYC Carnegie Hall, to name but a few. They are the only band of their genre to perform a show and sing the American National Anthem to an audience of 50,000 fans at Shea Stadium, the former home of baseball's New York Mets -- and 30,000 + at the former Giants Stadium.

dSb has built a fan base competitors envy, making them the veritable “Pied Piper of Festival Aficionados”. The band has incredible appeal to local radio listeners and high exposure to television audiences through their appearances on Home Shopping Network, QVC Network and Fox Network national television. The group also was featured in a 2004 National Network Television Commercial for Hewlett Packard’s iPod. In July of 2005, dSb was involved in a movie shoot for the comedy “Down In The Mouth” with director/actor Kirby Ward.

Recording on the Wise Guy Records label, their body of work includes an original song commissioned for the 1994 World Cup Soccer Championships entitled "Fussballfest". The 1997 release, "Play It Loud," has sold thousands of copies, and their third and fourth offerings, "Total Kaos” & “Call It What You Want”, were considered for Grammy Award nominations. Out of 2,400 CDs in 28 categories the “Total Kaos” album was nominated for the 2001 JP Folk Music Awards, and on three separate occasions, it has topped international music charts for sales in America. Their CD release in 2007, “Live 'N' Kickin'”, captures all the best of dSb concert moments from their hugely successful 2006 tour and “dSb Live”, released in 2004 recreated the band’s potent presence on stage. 2010 brought dSb the Pace Award for Best Variety CD for their release “Looking Back”. As the title suggests, “Looking Back” is a retrospective of die Schlauberger and the music the band performed in its early days but with a modern twist.

To commemorate dSb’s twenty years of performing, the band filmed concert footage during their hugely successful 2009 Alpine Thunder Tour. The DVD combines footage of the band's live performances and candid interviews. This glimpse of life on the road with the USA's Premier German Festival Band captures the high-octane entertainment of dSb in concert.